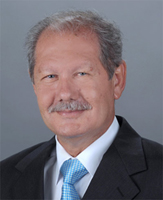 We are in the fourth year of our term of office and unfortunately the financial crisis which has hit our small country is still present, despite the positive statistical indications and the upgrades of the evaluation firms which are specialized in analyzing the economic indicators of the different countries and their banking institutions.

The financial crisis has become a nightmare for many and is still influencing Local Authorities. Unfortunately, many municipalities still present a negative economic image, their cash-flow is questionable and as a result they have become the recipients of complaints and of very bad criticism, which puts in doubt their existence.

Our Municipality’s image is not a bad one.

You have not heard me once to make complaints, despite the unfavorable economic situation we are all passing through, not even about the fact that the Ministries of Interior and Finance with their decisions treat Strovolos as a small Municipality of 6-7 thousand inhabitants and not as the second largest Municipality in Cyprus with about 70.000 inhabitants.

Last year, having passed a few years of severe frugality, during which we gained experiences on the way to handle different funds as to feel safe in operating our different services in the Municipality and have increased, even to a small extend, our productivity and efficiency, have submitted to the Ministries of Interior and Finance certain budget proposals for approval of increased funds proving to our employees and business partners that we appreciate their positive responses and efforts.

Unfortunately, the way that our budget was approved by the Central Government without any consultations has taken us back to the levels of the budget of 2013. As a result of this approval, we cannot respond to the basic needs of the citizens, thus making us look insensitive and not trustworthy.

In addition, The State Grant which-for those who do not know-consists of 3 categories of funds-is not allocated according to current applicable data but according to data that were decided in 2002 or even earlier and as a result, our income, is further reduced in relation to our commitments towards the citizens and all other professional bodies working in our Municipal boundaries. We have addressed these observations to all competent authorities without having until now any positive results. We, shall continue our efforts because the citizens of Strovolos deserve much more.

Streamlining of the operation of the Municipal Services

Our certifications with the “Investors in People” and “ISO” Standards continue to be valid and we continuously upgrade the operation mode of our human resources and procedures, with the intention of improving the Municipality’s effectiveness, thus keeping our Municipality among the leaders in Cyprus and Europe.

In cooperation with all other Municipalities of the Nicosia District and by utilizing the Nicosia Development Agency Ltd (ANEL), we have successfully moved on implementing a new European project of integrating the Third Country Nationals, a project that is co-funded by the European Integration Fund and the Republic of Cyprus through the Ministry of Interior.

As mentioned previously, our social welfare services towards the elderly citizens have been upgraded despite the fact that the Central Government (Social Welfare Services) has reduced the financing towards the Municipal Multi-Functional Foundation.

Despite the economic crisis and the further reduction of the State Grant, we continue to operate in the present school year and will continue to operate two additional Childcare Centres provided there is still a need for them. In this way we show our determination to continue to help the families who, because of their work, cannot take care of their children during the afternoon.

Our cooperation with the “Social Groceries” of the Church of Cyprus and the Spiritual Support Centre of the Holy Kykkos Monastery-which has, unfortunately, recently suspended its services because of financial constraints- continues so as to support all our citizens who are in need. We hope that this cooperation will be strengthened even more, since the number of people in need of such assistance is still high.

The operation of the Cultural Centre of Strovolos in the Ηistorical Centre has been really upgraded the lifestyle of that part of the Municipality. The services offered by the Municipal Library have also been upgraded and expanded. As a result, people have embraced them with a lot of affection and satisfaction. The Cultural Centre has already been used for the organization of a number of important events such as seminars, small conferences and exhibitions, thus putting it on the map of places for such events.

The Evaluation Committee for the Architectural Competition of the Historical Centre under my presidency has completed its work and we will very soon proceed with the invitation of the Competition. Constructive efforts are also been made so as to secure the necessary funds for the financing of the project through European programmes/funds.

As we all know, the first draft legislation that was prepared by the Minister of Interior has been rejected by all interested parties- political parties, the Union of Cyprus Municipalities and the Union of Cyprus Communities. Since then, many months have passed during which the Minister of Interior has had contacts with all political parties, Local Authority Organizations and other Experts/Counselors. During the last few weeks, the Minister of Interior has presented to the political parties his new thoughts/ideas which are based on a compulsory clustering of certain services-District Clustering, Municipal Clustering, Community Clustering and Municipal/Community Clustering. According to the Minister of Interior, the political parties agree to a great extend with his new thoughts/ideas and he expects that, with the submission of the new draft of legislation at the beginning of June 2015 to the Council of Ministers, this will be sent to the House of Representatives before their summer vacations, so as to be discussed next September and to be approved by the end of 2015. Having in mind what has happened in the recent past, this autumn is expected to be a “hot one” for Local Government. We have been informed that the draft legislation is now at the Government Legal Service for vetting before its submission to the Council of Ministers.

We want a strong and economically independent Local Government, which will be able to offer to the citizens the best services at the shortest possible time and with the lowest cost. I assure you once more that with the cooperation among all of us we will overcome all existing problems and we will take Strovolos a step forward.

Finally, I reassure you that the Mayor’s office is always open for every citizen of Strovolos, who would like to discuss any issue or express any complaint regarding the Municipal Services.