Blog - Latest News
You are here: Press Releases/ Announcments/ Events1 / Μeeting of the Ambassador of the United States of America in Cyprus, Judith ... / Events2

Among the issues raised by the Mayor, were the role of local authorities in Cyprus, as well as the challenges the Municipalities face in general, with waste management constituting as top priority, and how these could be dealt with through the proposed local government reform Bill.

In relation to the planned projects in the Municipality of Strovolos, the Mayor analyzed the benefits expected from the Slow City project for the restoration of Strovolos’s Old Center, which is expected to be completed within the year 2021, aiming to create a more anthropocentric and sustainable city. 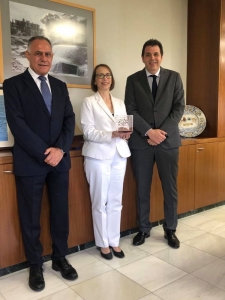 Climate Change Summer School organized in the framework of the project Walk...
Scroll to top
We use cookies on our website to give you the most relevant experience by remembering your preferences and repeat visits. By clicking “Accept All”, you consent to the use of ALL the cookies. However, you may visit "Cookie Settings" to provide a controlled consent.
Cookie SettingsAccept AllReject AllRead More
Manage consent